A huge Thank You to Wires for supporting and funding Hunter Wildlife Rescue with food for our fauna in care which will also help our carers whom work so hard caring for the fauna. The funding will now allow us to continue the food bank free still to all our approved fauna carers. Wires have donated $12,000 to go towards a WILDIFE FOOD account to be set up so HWR can purchase fauna food through Newcraft a fauna food suppler in Sydney. Also Wires have nominated and were successful in getting 5 Woolworths stores throughout the Hunter to supply free fruit , veggies and meat to help feed the fauna in care with HWR. This is been done under Wires National Food Grant project and we wish to thank Wires for their support and help and to say how grateful we are receiving this funding and support.
A huge Thank You to Wires for a $12,000 Donation for food for fauna in care and successful nomination for supply of food by Woolworths. Thank you Wires!

Magpies are one of Australia’s most distinctive birds, gracing us for most of the year with their beautiful songs. However, during mating season, a very small percentage (between 3- 10%) become highly aggressive, swooping and attacking passersby in their territory. 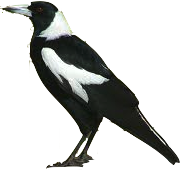 People most commonly attacked are walkers, joggers and cyclists, with attacks possibly resulting in either distress and/or injury.
The magpie mating season is from August to October, during which aggressive behaviours may include:
• alarm calls and distant swoops, where the bird will fly several metres behind a passerby and perch nearby;
• close swooping, where the bird will swoop from behind or side, making an audible “snap” with their beaks, even pecking or biting at the face, head and neck;
• dive-bombing and striking, where the bird dives and strikes the intruder’s head with its chest;
• a frontal attack, in which the bird lands on the ground in front of an intruder, flying up and landing on the chest of the pedestrian; it may then continue to peck at the person’s face and eyes.
Such behaviour is not confined to magpies. Other Australian birds which exhibit aggressive behaviours include butcherbirds, plovers and magpie-larks (more commonly known as pee-wees). Because many of these birds nest in urban areas, it may be necessary to take preventative precautions against attacks during the mating season.

Ways to avoid attacks from magpies:

Pay attention to the nesting areas of magpies. If possible, take the long route around these areas.
Councils and government departments sometimes maintain ‘magpie maps,’ reporting the location of magpie attacks.

Contact your local council or NPWS office for information on or to report problem magpies; some erect and maintain ‘magpie maps to inform the public at large by way of problem areas. Even handmade temporary signs can help others in your area.

The worst thing to do during a magpie attack is to yell and flail your limbs about. While it is difficult to keep a level head, it is important to keep calm and walk quickly away from the attacking bird, not to run.
Try to keep your eyes on the magpie – they will generally attack from behind, so knowing where the bird is will be an advantage for you. If you are very concerned about your safety, fold your arms and place them above your head to protect your face.

If you are riding a bicycle or horse, it is best to dismount. For reasons best known to magpies, bicycles irritate magpies the most. One of the major causes of accidents following a magpie swoop is falling from a bicycle (or horse). In some cases, riders have fallen while in traffic and suffered severe injuries, even death.

Tips to protect yourself from swooping and attacks:

Carry an open umbrella or walking stick with you (the umbrella also gives you the advantage of keeping out of the sun!). Holding the umbrella or stick above your head will make you seem larger.
If a magpie attacks, it will most likely go for the highest point – in this case your umbrella or stick.
It is important to never wave the stick about or try and hit the bird. This will make the magpie feel more threatened and it will just try to attack you all the more.

2. EYES ON THE BACK OF YOUR HEAD

Attach fake eyes, or an image of eyes, to the back of a hat or helmet. Magpies will mostly attack from behind, so if they think you are watching them out of the back of your head, they will be less likely to swoop or attack. If you do not have a hat or helmet, try wearing your sunglasses back-to-front. If you are riding a bike, a helmet can be modified to discourage swooping. Simply attach brightly coloured zip-ties (also known as cable-ties) to your helmet and don’t cut the excess length off.
This may look silly, but is one of the most effective deterrents. The bright spikes on top of your head will be a distraction to the magpies.

Attaching a tall pole or flag to the back of your bicycle can deter potential swoops.

Magpies are one of the smarter breed of birds. They are able to tell time by someone following a regular routine. If possible, vary your routine so no birds will be sitting and waiting for you.
A testament to how smart magpies are is their ability to recognize people. If a person is attacked and reacts frantically, a magpie could recognize you and continue to attack later on.

Never harass magpies, or throw objects (like rocks) at aggressive birds or nests. This won’t help anyone. Throwing things will only aggravate these birds further, creating a further distrust of people. This will lead to worse and more frequent attacks.

Please Note: Magpies are protected in Australia. This means it is illegal to harm or kill them. Remember, they are protecting their eggs and chicks and these attacks are the only way they know how.