A huge Thank You to Wires for supporting and funding Hunter Wildlife Rescue with food for our fauna in care which will also help our carers whom work so hard caring for the fauna. The funding will now allow us to continue the food bank free still to all our approved fauna carers. Wires have donated $12,000 to go towards a WILDIFE FOOD account to be set up so HWR can purchase fauna food through Newcraft a fauna food suppler in Sydney. Also Wires have nominated and were successful in getting 5 Woolworths stores throughout the Hunter to supply free fruit , veggies and meat to help feed the fauna in care with HWR. This is been done under Wires National Food Grant project and we wish to thank Wires for their support and help and to say how grateful we are receiving this funding and support.
A huge Thank You to Wires for a $12,000 Donation for food for fauna in care and successful nomination for supply of food by Woolworths. Thank you Wires!

What is a Raptor?

A raptor is usually defined as “a bird (such as an eagle or hawk) that kills and eats other animals for food”.

Birds of prey use their keen eyesight, curving beaks and strong talons to hunt living prey. Also known as raptors, they include species such as eagles, falcons, hawks, harriers and owls. A good tip to identify a bird as a raptor is to look at its wingtips in flight, as the feathers are often divided into ‘fingers’.

Eastern ospreys are coastal raptors and feed almost exclusively on fish. Smaller than the sea eagles, they have straight tails, grey underparts and dark brown wings and backs, with dappled brown chest feathers and a narrow brown mask running back from the eye.

Ospreys tend to breed on clifftops, or other high points such as power posts or light towers, in large nests that are used year after year. They can be difficult to spot when they are hunting, as they skim low over the water.

The Pacific Baza is a medium-sized, long-tailed hawk with a prominent crest. It is slim-bodied, with a narrow head and neck. The wings are paddle-shaped, well-rounded and deeply ‘fingered’. The head, neck and breast are grey and the underparts are white with bold dark banding. The legs are short with weak toes. The eyes are golden-yellow and domed, placed well on the side of the head, giving a slightly ‘pop-eyed’ look. The female is heavier and browner on the crown than the male. It is also known as the Crested Hawk or Baza, or the Pacific Cuckoo-Falcon.

Once known as the ‘Crested Hawk’, the Pacific Baza is a raptor of tropical and subtropical woodlands where it breeds in tall trees, placing its shallow, cup-shaped nest of sticks and twigs among the foliage. When breeding, its principle food is stick insects, which are snatched from the outer foliage of the canopy, sometimes after perching in the canopy and inspecting the leaves, or scrambling about through the foliage, but most usually by plunging into the foliage after flying just above the treetops. 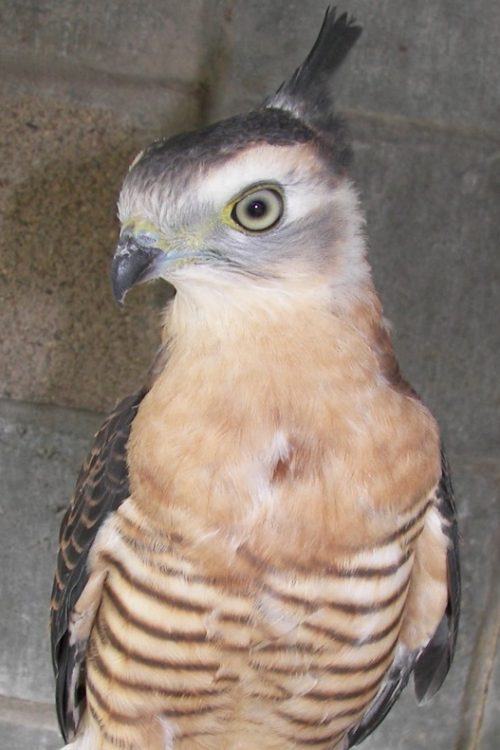 Black-shouldered Kites are medium to small raptors (birds of prey), and are mostly pale grey above, with a pure white head, body and tail and black shoulders. The wings are white underneath, with black wing tips and the wing span is 80 cm to 100 cm.

Females are larger than males. The red eye is marked by a black comma that extends behind it. The nostrils are yellow and the legs and feet are also yellow.

The Black-shouldered Kite has a direct flight with quick shallow wing beats interspersed with glides on upswept wings (like a seagull), and is often seen hovering, with feet dangling. 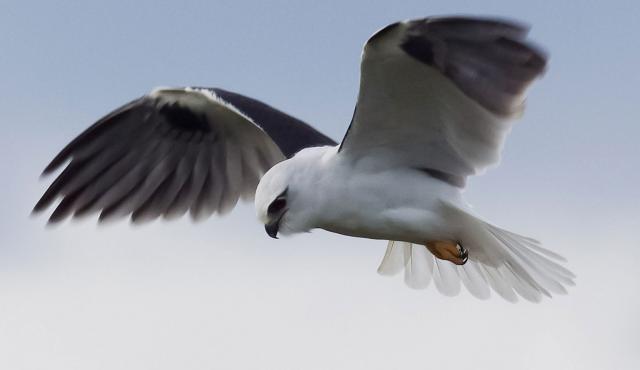 Common throughout much of mainland Australia.  They usually inhabit grasslands and other open habitats, and with the expansion and establishment of agriculture in many regions, forested areas have been cleared, providing additional habitat, as well as extra food, in the form of House Mice, which forms a major part of the species’ diet. Occasionally large numbers of Black-shouldered Kites descend on a region, usually coinciding with plagues of mice or, occasionally, grasshoppers.